Lavender is not just for aromatherapy! Culinary leanings

Let’s face it. It is hard to find a gentleman who is amazed by lavender. A chef-friend and her guy pal came out for dinner a week or two ago. I took him to the lavender, you know, to show him what it looked like, to stick some under his nose and to make me feel good about tending it all through the winter, spring, summer, fall, winter, spring…you get the picture. And I quote the guy pal, here, who said in amazement, “That smells really good. There’s more than one kind? I didn’t know there was more than one kind of lavender!” I gave a short discourse, talk of bees ensued and the amazement was brief but very gratifying, and yes, there are hundreds of types of lavenders.

Academic lavender confusion is so great that mystical musings and new cultivars constantly cloud the academic texts. What I mean to say is that lavender loves to morph on its own and folks love, well, morphing it, so there are always new breeds. One breed is better because it has long spikes, one because it has precious esters, and so on.

Sometimes an ugly ducking, but always a winner in my culinary garden, is English Lavender. It is, officially, the sweetest cooking lavender. I grow several English cultivars, and not unlike wine grapes, each brings its own bouquet to cooking.

We sell it, when we find someone knowledgeable enough to know the difference in our hand grown and the two-year-old stuff you can order in bags, online. I have nothing against the two-year-old European stuff (as a throwaway at weddings). But, seriously, no REAL culinary venture with lavender is as satisfying as including newly dried, just popped off the stem, lusciously purple Angustifolia bursting buds in your scones!

It can surely be said, scouts honor, there is nothing like it. Yes, you can. Yes, you should. Cook with newly harvested English buds. Lavender sugar, peaches, strawberries, jams! Stay tuned. Recipes coming this week.

Our culinary lavender is now for sale.

Find us online at Augusta Locally Grown or email us at whitehillsfarm@gmail.com to purchase new culinary lavender! 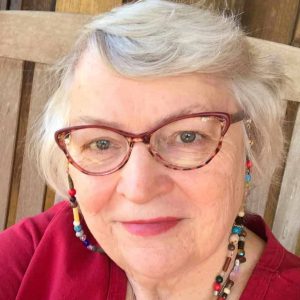 Sitting on the porch that is the definition of home-grown comfort, Amy brought out a dish of pecans to snack on with our lavender iced tea. The pecans were sweet with a hint of salt and ... smoked! (Patrick throws a lot of stuff on the grill and in the smoker and the results are always spectacular.) The pecans were like heaven.

Between the lavender everywhere, the porch, the view, the company, and the pecans, we might just as well have been in heaven. 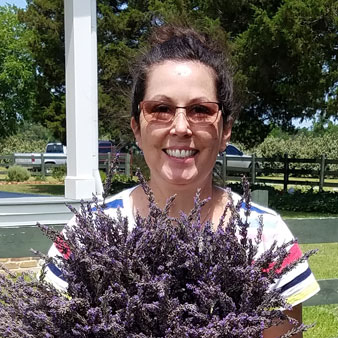 You'll want to go back again and again!

Among the gardens and 100-year-old farm house is a picturesque red barn where Amy and Patrick not only sell their merchandise but also entertain and/or put on workshops. I have had the pleasure of attending several of these events ranging from cookie making, to lavender harvesting and arranging, to yoga classes.

I am always looking for what they have available because once you experience the sheer beauty and peaceful feel of White Hills Farm you too will want to go back again and again. 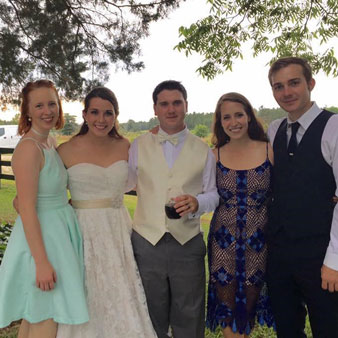 For me, it's a place tied to fond memories

White Hills Farm is the perfect backdrop for any occasion -- it has this way of enveloping and elevating meaningful celebrations. For me, it's a place tied to fond memories and an eagerness to return. Year round, its something to behold, a slice of heaven run by the best of people.

A ridiculous amount of coffee was consumed in the process of building this project. Add some fuel if you'd like to keep me going!